Another Louisville Landlord Shot Dead After Knocking On Door For Rent

ATTENTION LANDLORDS: Do You Knock On Doors To Collect Rent?

This is the second time in just a couple of years that a Louisville Landlord was shot dead by their tenant. The previous murdered Landlord was a dispute over a $58 utility bill

LOUISVILLE (WHAS11) – A SWAT standoff in Portland is now over after a man fatally shot another man in the 2300 block of Griffiths in Portland.

The suspect, 21-year-old Joshua Lewis Young is charged in his death. LMPD said the shooting was the result of a landlord tenant dispute.

The landlord was fatally shot when he arrived at the home to collect rent.

From SKY11, you could see dozens of officers, K-9 units and the SWAT team surrounding Young’s residence and the nearby area where the search for Young happened for most of the day.  Neighbors, many who wanted to conceal their identity because of fear of retaliation, said they heard several gunshots around noon Monday.

“Whatever gets in their way, they are going to shoot. Something has got to be done this world is getting crazy every day, every day,” one neighbor said. 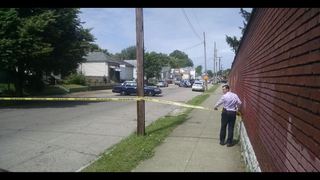 LMPD said the landlord arrived at a home in the 2800 block of Griffiths to collect rent and was shot by Young multiple times.  The landlord then left the scene in an effort to drive himself to the hospital.

“A little later officers found the victim that had been shot multiple times at corner of 24th and Owen Street. He was taken to University Hospital where he was later pronounced dead,” Dwight Mitchell, Spokesperson for LMPD, said.

SWAT teams rushed in and moved neighbors to safety. It’s a scene that neighbors said they never would have imagined.

“This is too close to home. I have been here 60 years and nothing like this has ever happened in my 60 years of being here,” another neighbor said.

The family said Young was in the home at the time with his girlfriend and a 3-year-old child. They were not harmed.

FREE Investor Training Webinars! Click to Register One Time for ALL